100 Things to Do in Birmingham Before You Die, Second Edition 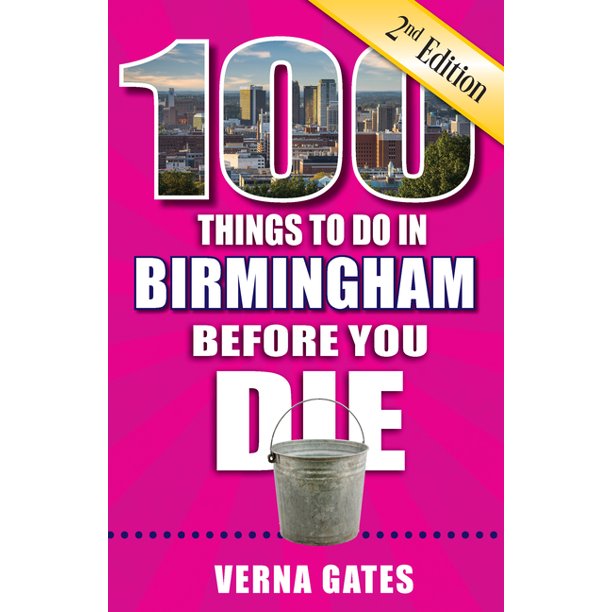 Called the Magic City, Birmingham sprang up fast, as if a magician’s wand pulled skyscrapers out of a valley surrounded by mountains. In 100 Things to Do in Birmingham Before You Die, Second Edition you’ll discover the famous places and hidden treasures of a city brimming with character, charm, and natural beauty. Whether it’s the best barbecue or martini, a picture-perfect round of golf, or where to find clothes by famed local designers, Birmingham native Verna Gates is ready to be your personal guide to the best the Magic City has to offer.

This book is a must-have for anyone visiting the city or those that have resided here for years.  It’s organized according to food, drink, music, entertainment, sports, recreation, culture, and fashion.  Personally, I can’t wait to visit the Birmingham Museum of Art.  BMA is the perfect location to learn about the culture and find inspiration for those in the creative space.

Although I have grown up in Birmingham, after moving back to the Magic City, there are several events and activities that are new to me.  For example, I have never visited Gianmarco’s Italian restaurant or the Talladega Speedway!

100 Things To Do in Birmingham Before You Die is the perfect coffee-table book or reference when venturing “outside.”  To purchase your own copy, visit Barnes & Noble.

And, although this is the 2nd edition, I am confident there will be several new editions in the future!

Verna Gates was born in Birmingham and can trace her local heritage back four generations to a land grant farm. She began her career as one of the original crew that launched CNN.

After moving back to her beloved home, she spent 25 years covering the state for TIME Magazine and Reuters International. She has received a lifetime achievement award from the National Federation of Presswomen.

If I ever let my head down, it will be just to adm

Do not go where the path may lead, go instead wher

Congratulations to the Editor and Owner, Kimberly