Are you ready for the 4th of July holiday weekend? Ann Taylor has just what you need – regardless if the weather is going to hold up for beach weather or not.

From a flattering bikini and shorts and tops that are an easy transition from day-to-night to grab-and-go dresses for the weekend bash – all the essentials fit right in your favorite weekend tote.

Presenting your new assistant and lifesaving product: the Amazon Echo

You’re probably asking, “what’s this object?”  Watch the video below to find out:

On Saturday, June 20, 2015 I was invited to take part in the grand re-opening event for PANDORA Towson Town Center.  The event revealed their new store design which complimented the campaign, “Art of You.”

PANDORA’s “Art of You” campaign invites consumers to embrace the self-creator within and tell their unique life story.  I was excited to attend the event because I am collector of PANDORA bracelets and charms.  My bracelet (s) allow me to wear those memories daily.  I also like the quality of their jewelry ranging from silver, gold, and diamond.

The event was also very informative.  I received a store tour, viewed jewelry, and learned more about the company’s overall philsophy.  Store associate (whose name was also Kim) shared their most popular ring this season due to Selena Gomez’s tweet:

Need the princess pandora ring in my life

I could not visit the PANDORA store without making a purchase for myself.  I decided upon the Faith, Hope, and Love charm to compliment my silver bracelet.  This particular charm’s symbolic to my life; Faith and Hope for all things possible while continuing to walk in a state of Love!

I love sunglasses!  They’re the perfect face accessory and from a health stand point, sunglasses protect the eyes from environmental factors and strain.

This Saturday, June 27th is National Sunglasses Day! It’s time to celebrate everyone’s favorite accessory come summertime. Whether you prefer classic aviators or trendy cat-eye style shades, fashionistas everywhere love their sunglasses and all the benefits they bring – especially in the summer sunshine. 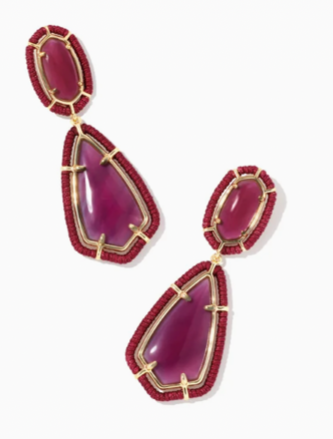 Polka dots! Add pieces from Ann Taylor such as an effortless maxi dress, romper or the perfect shirt of the peppy print to your wardrobe— big, small or mixed together, for a pop of fun this season!

Top off your polka-dotted ensemble with grab-and-go accessories, like a fedora or a bucket bag.

As part of this year’s National Suit Drive, Mens Wearhouse is issuing a challenge to consumers to meet or exceed the goal of 250,000 donated items. Over the past seven years, the National Suit Drive has collected approximately 850,000 professional clothing donations, and this year marks the opportunity to break the one million donation mark.

“A suit is more than just about how you look – it’s about how you feel, and it’s important to feel your absolute best during a job interview,” said Doug Ewert, CEO of The Men’s Wearhouse, Inc. “The National Suit Drive gives men looking to re-enter the workforce a chance at a new beginning. Through this annual campaign, we’ve had an opportunity to truly make a difference in people’s lives, and we’re excited at the potential of reaching one million donations this year.”

Starting on June 22nd, consumers can donate their gently-used professional clothing including men’s and women’s suits, ties, jackets, shirts, pants, belts and shoes, at over 900 Men’s Wearhouse locations across the country. As a thank you, donors will receive 50 percent off the regular retail price of their next purchase from Men’s Wearhouse (excluding shoes, clearance and Exceptional Value items).

“While the National Suit Drive collects gently used professional attire, what it’s really collecting is confidence, inspiration, and a chance,” said Joseph Abboud, award-winning designer and Chief Creative Director of The Men’s Wearhouse. “In a suit, the world looks at you a little differently, and everyone deserves to know what that feels like.”

This year, the National Suit Drive is partnering with DeMarco Murray, the AP NFL Offensive Player of the Year, to help spread the word. “Whether ‘suiting up’ on the field or off, I’ve felt first-hand the confidence a suit provides and how it helps you perform at your personal best,” said Murray. “I’m thrilled to be partnering with the National Suit Drive to give othermen throughout the nation the ability to recognize their dreams – and achieve them.”

To help spread the word about this year’s National Suit Drive, Mens Wearhouse is encouraging people to share the #giveasuit post found on their Facebook page. For every share, the company will donate $1 (up to $25,000) to the local nonprofits they have partnered with.

Coach, Inc., a leading New York design house of modern luxury accessories and lifestyle collections, goes to the dogs as it reveals its newest advertising campaign. Titled “COACH PUPS,” the new campaign features canine stars in a series of portraits photographed by Steven Meisel. It launches this month with Miss Asia Kinney, the adorable four-legged companion of Lady Gaga.

The campaign celebrates the dogs in our lives and captures the pups’ unique personalities as they “model” Coach’s Fall 2015 star bags. Additional PUPS staring in the campaign will be revealed shortly.  Miss Asia Kinney, Lady Gaga’s now famous French Bulldog has amassed a substantial social media following in only a few short weeks. The Coach bags she elegantly models in the campaign are the Edie and the Rucksack.

Art directed by Fabien Baron and styled by Karl Templer, COACH PUPS will appear in print, online and on outdoor media globally starting in July.

Lady Gaga commented: “I am so proud of Miss Asia! She’s a natural in front of the camera, and we’re both so excited that the iconic Steven Meisel shot her for Coach’s pup campaign! I really love getting to watch my best friend be a star.”

Stuart Vevers, Creative Director at Coach comments, “’I’ve never had so much fun on a shoot. The combination of Mr. Meisel and the pups was an extraordinary, surreal, special moment. We wanted to create playful images that make you smile. We were inspired by some images from the Coach archive, which featured Eddie—the dog that starred in the TV series Frasier—to create something joyful, with humor and character. That’s a spirit that’s uniquely at the heart of Coach.”

This new initiative will also introduce the social campaign #coachpups, including a range of online activities for fellow dog fanciers, opportunities for Instameets, special talks and other events hosted by the great and the good of the canine world. This will also mark the debut of the Coach Snapchat account.

Coach has made a donation to Chicago French Bulldog Rescue (frenchieporvous.org) on behalf of Miss Asia Kinney and her devoted owner.

Coach, established in New York City in 1941, is a leading design house of modern luxury accessories and lifestyle collections with a rich heritage of pairing exceptional leathers and materials with innovative design. Coach is sold worldwide through Coach stores, select department stores and specialty stores, and through Coach’s website at www.coach.com. Coach’s common stock is traded on the New York Stock Exchange under the symbol COH and Coach’s Hong Kong Depositary Receipts are traded on The Stock Exchange of Hong Kong Limited under the symbol 6388.

“I’m not conflicted about charging these police officers. I believe in applying justice fairly and equally, and that is what our system is built upon. That is why I do what I do.” – from Marilyn Mosby via Vogue Magazine.

by HEIDI MITCHELL|photographed by ANNIE LEIBOVITZ

Ready to leave a lasting impression? Rimmel’s long-lasting, transfer-proof foundation relaunches with the added benefits of comfort serum and SPF 20. With festival season fast approaching Rimmel will make sure you’re covered from humidity, to sun, to all night dancing!

Feel good flawless skin, all day, all night and beyond! Introducing Lasting Finish 25 HR full coverage foundation, Rimmel’s long wear skin perfecting foundation now with comfort serum for feel good, flawless skin that stays put 25 hours! Whether you’re dancing all day at a festival or having a beach party, Rimmel makes sure you do it in comfort! With full coverage this stay true makeup applies smoothly and evenly to cover the darkest of circles, blemishes and imperfections from morning through to night… and beyond. Leaving skin looking London flawless all day long, it’s sweat proof, heat proof, humidity proof, transfer proof, dance proof, camping proof … so along with your wellies it’s your best festival ally! What’s more, it lasts up to 25 hours, making sure you’re covered no matter where the music takes you.

The new skin-friendly comfort serum instantly hydrates skin whilst creating a lightweight finish and maintaining full coverage. Comfort serum means comfortable wear… around the clock!! Featuring SPF 20 for that all important barrier from harmful UV rays and added benefit of Vitamin E to help protect your skin from free radicals; this foundation really acts as a shield to protect your skin. Help your skin maintain youthful and healthy with Rimmel Lasting Finish 25 HR with Comfort Serum foundation, with SPF 20!

Available in a variety of skin perfecting shades, Rimmel has got you covered! For available shades, please see link: http://us.rimmellondon.com/products/lasting-finish-25h-foundation-with-comfort-serum

Lasting Finish 25 HR with Comfort Serum is packaged up into a sleek premium 30 ml glass bottle featuring a new slanted overcap in vibrant red, with a pump, ensuring quick, easy application. A stylish festival must have!

Finally a full coverage foundation with no compromises! What are you waiting for girls? Long-lasting, full coverage, skin perfecting makeup that feels good and comfortable to wear… around the clock!… GET THE LONDON LOOK.

Intense automatic liners with waterproof performance. Go for glamour with a fine line, or amp up the drama with a smokey look. No matter which way you style it, you get maximum impact, high definition color for an eye-catching look that lasts all day.

These super soft liners provide intense color in a perfectly smooth formula, giving you coverage that never pulls or flakes. The waterproof formula offers style that stays all day, and with a built-in smudger and auto-sharpener, this retractable liner gives you ultimate control for any eye style.

Selita Ebanks arrived wearing a white off- the -shoulder Ashi Studio gown, paired up with her box braids the look was pure perfection!  Ebanks was being honored for her humanitarian efforts at the annual event.