The first project from the powerhouse executive producing duo, Tami Ever After, debuts on VH1 Wednesday, June 19th and was just announced via People Magazine. The special highlights Roman’s relationship with longtime boyfriend, Reggie Youngblood and blends his hilarious and entertaining family from Houston, TX with Roman’s popular and charismatic daughters.

Additional series include ensemble cast docu-follows, “Queen City” and “Big Oil Houston” as well as several scripted and formatted projects. Roman and Scott-Young are focused on expanding their slate beyond unscripted and committed to bringing their productions to Houston where Roman and her family maintain a residence.

“You know, I have grown a lot over the years, and I want my presence on television to be positive and uplifting,” she added. “I want real women with families who have ups and downs to be able to relate to me and feel inspired and empowered knowing they can push through anything.” – Tami Roman

THE LOOK: ALL STARS Gearing Up For The Second Season

DreamVenture Productions announces the successful run of the pilot season and return of the makeover TV series THE LOOK: ALL STARS for a second season. The one-hour reality series aired on CW, MyNetwork and TBD stations of SINCLAIR Broadcast Group and has received positive feedback from the industry and consumers at large. “We are extremely pleased and excited to continue our collaboration with THE LOOK: ALL-STARS as the initial results were extremely positive, showing ratings double from lead-in programs for select markets in the time slots assigned,” says Rida Khan, Head of Fashion, Lifestyle and Entertainment Programming, SBG.

The series successfully integrated augmented reality makeover try-ons in real time, so the audience watching at home could try on the looks and discover beauty products used on the show. More than 2 million try-ons for every episode were generated through the Perfect365 app from their 15 million users. This unique collaboration is a first of its kind for a national broadcast TV show.

The executive producers of the show are gearing up for filming, slated to commence this fall, with the support of the beauty and fashion industries. In addition to brands coming back for this season that include the biggest names in beauty, the show has expanded participation from top cosmetic brands with more added to the list daily. New companies coming next season include Amazing Cosmetics, Amore Pacific’s Mamonde, Kevin Aucoin Beauty, Makeup Geek and Iconic London launching in the US on THE LOOK: ALL STARS. The series utilizes national TV broadcast as a platform to reach, educate, empower and entertain millions of consumers who are avid beauty lovers exposing them to high-quality beauty products from large and small companies alike.

Two hairstyling icons from the TV series presented onstage to promote the show and ramp up excitement within the elite hairstyling community at the North American Hairstyling Awards 2018, the most prestigious photographic professional hairstyling awards, attended by over 4,000 stylists. As a result of a special collaboration, select NAHA 2018 applicants will be featured in the second season as part of the talented cast. The TV series also held auditions and met with members of the beauty industry at COSMOPROF NORTH AMERICA, the largest B2B exhibition for the cosmetics industry. “As the most important beauty exhibition platform in the US at the moment, Cosmoprof North America always seeks to bring resources that can help build the business of indie companies in attendance. The TV series provides great national visibility for brands trying to connect with consumers in a different way,” stated Daniela Ciocan, marketing director and the brains behind Cosmoprof’s phenomenal growth in the last 12 years.

Beauty legends, fashion icons, recognizable names from entertainment, and top social media influencers will be featured on the show as judges and special guests. Daniela Pestova, cover girl, and TV personality will be coming in as a permanent judge in the next season. Larissa Love sought after hair colorist, Jennifer Goldstein beauty editor Marie Claire Magazine, Kirbie Johnson host/producer PopSugar, Emily Dougherty beauty director NewBeauty magazine and many more will be featured as guest judges. Integrating big names from social media, THE SOCIAL CORNER segment of the show will bring new faces such as Marlena Stell, Tiffany Stanley, Tokyo Stylez and Anthony Cuts.

For general information on the TV series, or to view episodes from the pilot season, visit thelookallstars.com.

Sinclair is one of the largest and most diversified television broadcasting companies in the country and a leading local news provider. Sinclair’s content is delivered via multiple platforms, including over-the-air, multi-channel video program distributors, and digital platforms.  http://www.sbgi.net/.

The beauty event featured makeup, wellness stations and product sampling.  While attending, I received brow tips from Angela King Brows.  She reshaped my brows and suggested products to help them grow from waxing.

EveryHue Beauty Consultants matched the tinted moisturizer to event participants.  I discovered that my hue was #4 and very impressed with the moisturizer coverage.

After visiting all of the beauty stations, I decided to purchase the Glow Perfect Moisturizer and received a Hue Blending Sponge.

Christina Milian has kicked of 2016 in a major way, splashing up on headlines after rave reviews for her role as Vanessa on FOX’s new hit sitcom “Grandfathered,” where she stars alongside John Stamos, Paget Brewster and Josh Peck.  Milian is also the star of her own hit reality show on E!, “ChristinaMilian Turned Up” which follows the multifaceted starlet in her everyday life as she juggles motherhood, her family and career.

In December 2015, Milian returned to the music scene with a more sophisticated and alluring sound offering her fans a four-track EP titled 4U that followed up to her 2006 album, So Amazin. The highly anticipated project offered the viral singles “Like Me”, a west coast up-tempo cut that features rap icon Snoop Dogg — as well as “Do It” which is a provocative mid-sultry vibe that features rap-star, Lil Wayne.  Milian also released stunning visuals to both singles that featured her in her element.

Kourtney Kardashian and Khloe Kardashian revealed their magazine feature in Architectural Digest.  The celebrities shared a few pics (via Instagram and Twitter) from the March 2016 issue.

Kourtney and Khloe looked amazing on the magazine cover!

Click on the link to view more photos of the celebrity homes issue:  Khloe and Kourtney Kardashian Realize Their Dream Homes in California

Continuing to build her entrepreneurial repertoire, actress and singer-songwriter Christina Milian opens the doors for her store, We Are Pop Culture, this past Monday. The store began online back in November 2014. Shortly after launching the online version, We Are Pop Culture was featured on KTLA. Ever since, the brand has grown immensely. Eight months after the feature, Christina made the decision to open the brand new store front on Melrose Ave in Los Angeles.

We Are Pop Culture, as a brand, highlights lifestyle, pop culture, and its influences on the world today. The company focuses on providing customers with visually stimulating, thought provoking, and trendsetting products that fit into their everyday lives. This Street-wear and Casual-wear clothing for the modern-day woman is edgy, funky, comfy, and trendy.

For more information on the brand, We Are Pop Culture, please visit their website http://wearepopculture.com/.

Formerly known as Bruce Jenner has now been revealed as Caitlyn Jenner on the cover of Vanity Fair Magazine. The cover release is scheduled for July, 2015.

Click on the link to read more:  Vanity Fair 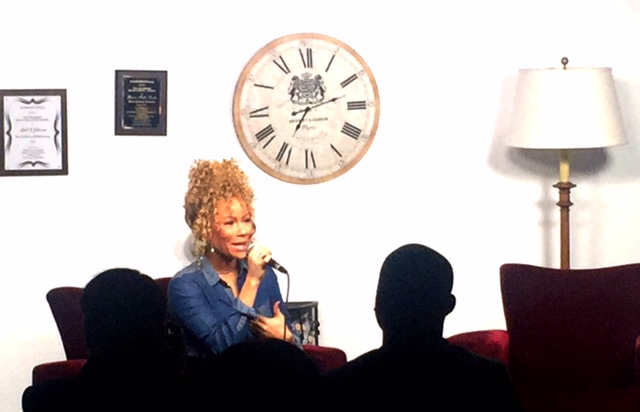 WPB Radio hosted a media event for music artist Brave Williams at The Creative Hub in Baltimore.  Brave has joined the cast of R&B Divas: LA and wanted to share her music and show trailer with local media outlets. Invited guests were able to network, meet, and interview Brave during the event.

Brave Williams is a talented, down to earth artist and we’re looking forward to watching her this season on R&B Divas: LA 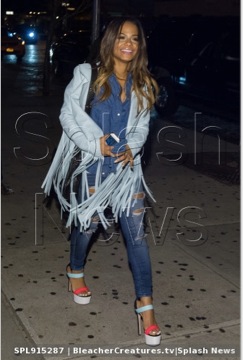 Christina Milian has had one constant during her whirlwind press tour for her new hit E! TV Show ‘Turned Up’ – her Ruthie Davis shoes! Rocking a variety of sky high styles from the collection over the past week, Christina has incorporated these sexy and fun heels into her awesome rocker-fashionsita ensembles.

She has not only been spotted in these shoes, but has shared shots of her rocking them on her Instagram, as well!

Glam Screen and Accessories by Jonathan Cheban: Take Your Selfies to The Next Level 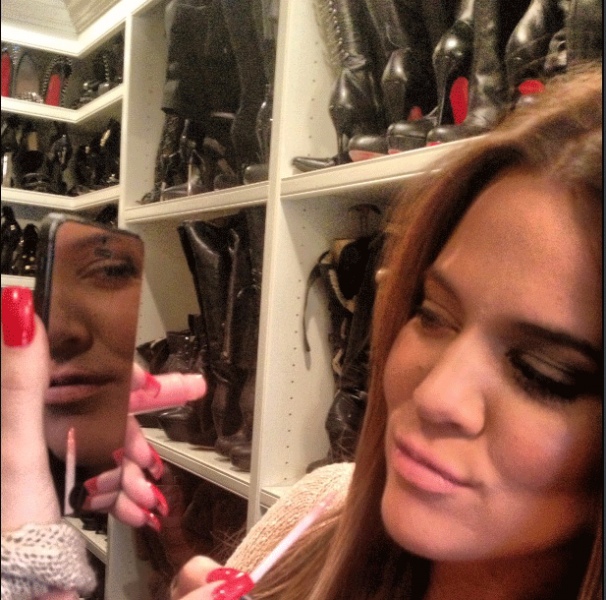 It’s New York Fashion Week and what does that mean? We are taking selfies with our smart phone; asking our girlfriends, “how do I look” or searching for a mirror in our handbags. Those problems are solved with the new Glam Screen and Accessories, created by Jonathan Cheban from Keeping Up With The Kardashains.

My Experience: The screen was very easy to put on and allowed me to take quality selfies!  Also, by using the selfie ring I was able to hold the phone upright, strike a pose, and smile for the camera.  See photos of my Glam Screen (and accessories) below – to order click on the link: Glam Screen