The Easter Bunny is on his way! Easter is just over a week away (Sunday, April 4), but it’s not too late to decorate for the holiday or craft a special Easter basket for young ones.

TheSoul Publishing – the company behind some of YouTube’s most-watched channels – has put together several fun and easy tips to decorate for Easter this year.

To celebrate, TheSoul Publishing — the publisher behind one of the top five YouTube channels, 5-Minute Crafts – has provided some delicious treats to keep the fun going at your Super Bowl party. 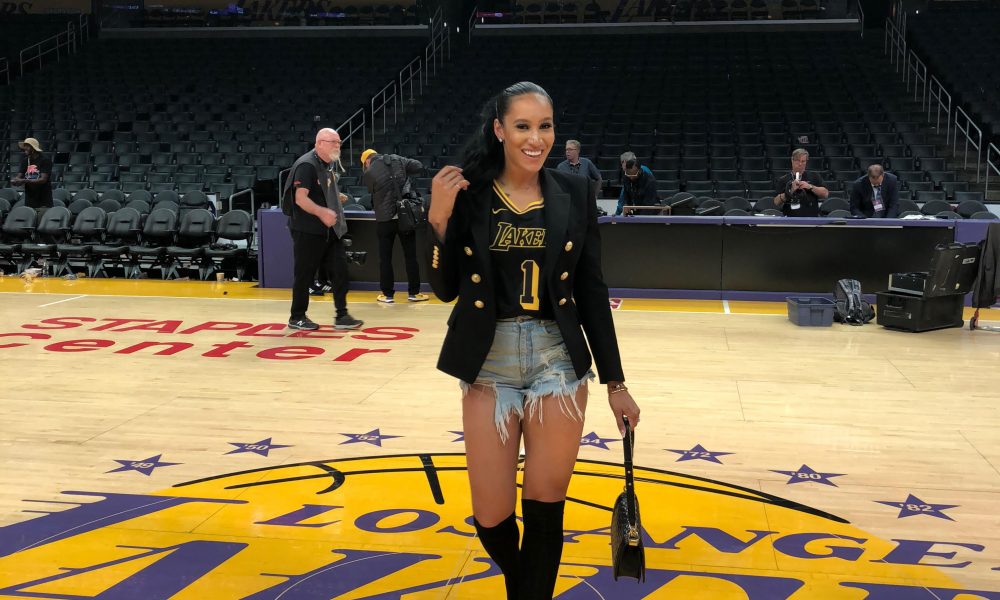 McKenzie Caldwell-Pope is the wife to Kentavious Cadwell-Pope of the Los Angels Lakers. Outside of being a phenomenal wife McKenzie is a Mom-boss of almost three boys and a well-known social media Beauty Enthusiast and Fashion Influencer.

On Dec. 8, 2018, McKenzie claimed the title of an official youtube as she launched her youtube channel “McKenzie in the Mirror“. With 312 subscribers and almost 2k views in under 24 hours, it is safe to say many are already enjoying this channel.

McKenzie in the Mirror, will allow subscribers and viewers to look through the mirror and into the daily life of McKenzie Cladwell-pope. Each Monday on McKenzie Monday’s you can expect anything from Vlogs, Q&A’s, unboxing’s from some of your favorite brands, to even DIY activities for your home or with the kids. You’ll never know what to expect until you look into the Mirror; McKenzie’s Mirror that is!

For all interviews and Features – Please Contact, Publicist, Milan Mobley at info@umanagementpr.com

McKenzie Caldwell-Pope was born in Dallas, Texas but currently, resides in the sunshine state of Los Angeles California. With a Bachelor’s Degree from Louisiana Tech University in Business Marketing; McKenzie used her college education to creatively infiltrate the fashion and beauty industry. While managing her own brand, being a wife and mother her plate is always full, but McKenzie embodies her roles fabulously and effortlessly and dares to take on more.

With an incredible social media influence, she uses her platform to be an inspiration to many women experiencing motherhood. The lessons she teaches express that motherhood can be fabulous and stylish just as any other walks in life.

Recently, McKenzie has been taking over the industry with partnerships with a few notable brands such as MAC at the M.A.C. Supreme Beam Launch Event, Fashion Nova, FabFitFun Summerhouse, and Nordstrom’s Beauty Trends Week 2018. Alongside those brands she previously had the pleasure of hosting the Forever 21’s Back to School Denim event in Los Angeles. McKenzie has also has had an exclusive interview with Style + Life + Fashion blog and was named “Bride of the Day” for Galia Lahav Haute Couture Collection.

Take a look at the video clip (below) from Balmain SS17 Collection.  The runway show was featured during Paris Fashion Week 2016.

From viewing the collection, my favorite pieces included collar necklaces, wide belts, sheer tops, and long (flowing) skirts.  Every design from the show was stunning!

Yes, there are some benefits to purchasing high-end products but I am here for the everyday girl. She’s the mom waiting in a carpool line or busy professional that has to travel.  Both of the women listed have one thing in common, they want to look great!

That’s why I’m a huge fan of the Covergirl brand.  Their company provides on-trend makeup and can be purchased at your local drugstore or supermarket. What does that mean?  Customers can pick-up the latest lipstick shade while grabbing a carton of milk.  I love it!

Recently, Zendaya shared a beauty tutorial on achieving a Custom Lip Cocktail. Anyone can create this face with Oh Sugar! In Caramel, Jumbo Gloss Balm in Caramel Cream, and Queen Collection Lip Gloss in Premier Pink.  Click on the video below:

Style + Life + Fashion was present on Friday, August 26, 2016 serving as a media outlet for the production.  Guests were greeted by Tara Gray (TV Host and Producer) while welcoming participants to this fashionable event.

BENJAMIN JAY was the opening designer on August 26, 2016 along with RAILS, BRADFORD BILLINGSLEY and featured designer CHARLES ELLIS SARTORIAL.

Runway retailers for the show included Gus Mayer and ALCHEMY 213.  In addition, 8 emerging designers and  30 rising design stars were present on this particular night.

With vendor support, upbeat music, and unique designs, Birmingham Fashion Week will continue to be a runway show that’s anticipated (here) in The Magic City!

One of my favorite quotes is “The future belongs to those who believe in the beauty of their dreams” by Eleanor Roosevelt.  This quote is significant in terms of goal setting and personal achievement.

Attending a Jill Scott concert was a goal on my personal to-do list.  Jill Scott is a soulful singer and her voice has a variety of range.  As a song-writer, her lyrics go beyond the surface; addressing topics that are realistic to listeners.

I was gifted a set of tickets from my brother (and sister-in-law) to take part in her performance at the Amphitheater located in Tuscaloosa.

Jill Scott’s concert pushed beyond the limits of watching a songstress to viewing a “seasoned” artist/poet.

She gave us relationship advice and shared reflections from her own life. The concert was amazing and I encourage anyone who’s a fan of her music to purchase tickets from ticketmaster.com

A Passion for Fashion: Achieving Your Fashion Dreams One Thread at a Time by Nick Verreos

Becoming a notable figure in the ever-changing and exclusive world of modern fashion has become more difficult than ever before. Each year, thousands of new designer labels are launched, and tens of thousands of fashion students and recent graduates vie for internships and jobs. Simply put, competition is stronger than ever before. For modern fashion professionals trying to find their place and differentiate themselves from the pack, standing out from their peers is paramount.

Written in straightforward language and broken down into 10 easy-to-read chapters, Verreos debunks common myths and ultimately reveal the harsh realities of the industry.

This book is a must-read for anyone considering a career as a fashion designer, merchandiser, publicist, blogger, or any other position in the fashion industry.

In this insightful and educational book, Verreos also reveals:

€ The best ways prospective students can prepare for fashion school
€ Fashion sketching essentials
€ Tips to create a portfolio that lands your dream job
€ How to know if fashion is the right career path for you
€ How to launch your new startup label successfully
€ Ways to deal with the press and get your designs on the red carpet
€ Project Runway: The Good, Bad, & Ugly
€ And so much more!

Verreos received worldwide attention after appearing on the television show Project Runway and later became the winning mentor on Under the Gunn. Since then, he has dressed celebrities including Beyoncé, Katy Perry, Heidi Klum, Carrie Underwood, and Academy Award-winning actress Marlee Matlin under his label NIKOLAKI. He has also enjoyed impressive success with his NV Nick Verreos sportswear line on major TV shopping networks in the U.S. and Europe.

As a renowned red carpet fashion expert and correspondent, he has reported for E! Entertainment, TV Guide, Style Network, NBC, and CNN International. Verreos is a graduate of the Fashion Institute of Design & Merchandising (FIDM), and is a guest lecturer and official spokesperson for the college.

Paul is an American fashion designer and co-founder of the high-end fashion line, NIKOLAKI. He built an extensive resume in the world of entertainment and fashion styling, working with André Leon Talley for Vogue magazine and photographers such as Arthur Elgort, and Amanda DeCadanet.

Additionally, he has styled celebrities such as Kate Hudson, Heidi Klum, Vanessa Paradis, and Twiggy. His television credits include costume design and wardrobe for MTV, ABC, FOX, and The WB. Paul is a graduate of the University of California, Los Angeles (UCLA) where he received his B.A. in theater arts, and a master¹s degree in costume design.

Connect with Verreos and Paul on:

Kourtney Kardashian on The Ellen Show – Lanvin Jacket and Shorts

If you missed Kourtney Kardashian on The Ellen Show we have a short clip below!  Kourtney looked fabulous wearing a Metallic Suit created by the designer Lanvin.  She was effortless with her sleek hair, natural makeup, and scrappy heels.

I have been a fan of Black Opal Cosmetics for many years.  To start, I like my foundation to match the exact color of my skin tone.  I also seek to wear a foundation that provides moisture and full coverage.

For the last two months, I have been using True Color Pore Perfecting Liquid Foundation.  The liquid foundation’s amazing and my face has never looked better!

Now that we’re in the winter months, it’s time to change my moisturizer, foundation, and primer.  Black Opal has created True Color Perfecting Primer  which has extra emollient ingredients to hydrate the skin and refine the appearance of pores.

Check back here in two weeks, I will be testing the beauty product and sharing on my Youtube channel.

⛪️ Walk in your authority and purpose… Toda