As previously announced, Hulu will serve as the official streaming destination of the 2022 ESSENCE Festival, which will take place in person in New Orleans, and virtually, from June 30 – July 3, 2022.  This marks the first time ever that ESSENCE has made programming from its iconic Festival available on a streaming platform. Select daytime programming including panel discussions and evening musical performances will be available exclusively to Hulu SVOD subscribers to livestream at no additional cost*.  The “ESSENCE FEST PRIMETIME” livestream will run on the platform July 1 – 3 from 7:00pm – 11:59pm CT.

In addition to live celebrity interviews with host Angela Yee and highlights from daytime programming, “ESSENCE FEST PRIMETIME” will include the following musical performances (all times CT, subject to change):

Hulu will also have a special presence on-site at the Festival, providing guests with an immersive experience at “The Rink @ The Hulu Motel,” a roller skating rink filled with interactive touchpoints, giveaways, and content-themed bites and drinks. Skaters will also be treated to live performances by DJ OHSO and DJ DIAMOND KUTS.  The three-day activation will be open July 1-3 from Noon – 7:00pm to guests 21+ at the New Orleans Civic Theatre.

GMA3: WHAT YOU NEED TO KNOW’ HEADS TO NEW ORLEANS   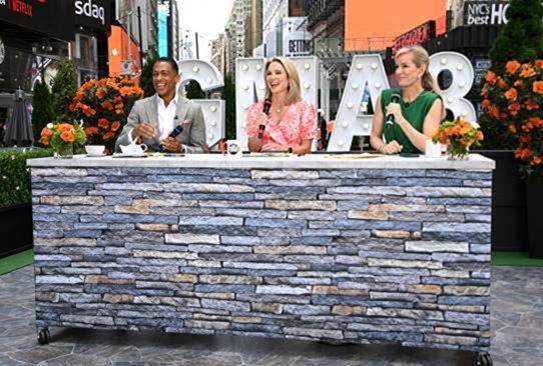 To kick off this year’s ESSENCE Festival of Culture™ presented by Coca-Cola®, ABC News’ “GMA3: What You Need to Know” co-anchors Amy Robach and T.J. Holmes and ABC News Chief Medical Correspondent Dr. Jen Ashton will host a special broadcast originating from the heart of New Orleans at Brennan’s in the French Quarter.

On Thursday, June 30, the “GMA3” team will be live from “The Big Easy” to kick off the festival, which ends on Sunday, July 3. Drawing more than 500,000 attendees annually over the holiday weekend, ESSENCE Fest is one of the largest festivals in the country.

As DJ D-Nice spins throughout the show, Robach, Holmes, and Dr. Ashton will interview actress Marsai Martin and New Orleans Mayor LaToya Cantrell, and look at the hottest fashion trends to expect at this year’s festival with ESSENCE beauty and fashion editor Blake Newby. The show will also give viewers a look back at the history and beginnings of ESSENCE Fest and detail how it became the massive celebration of Black culture it is today with ESSENCE CEO Caroline Wanga.

“GMA3” executive producer Catherine McKenzie said, “After these last few years, as cities are opening their doors to embrace tourists, we are excited to take the show on the road and capture the joy throughout ESSENCE Fest and New Orleans. We hope this coverage will shine a light on this important celebration and help grow appreciation for the amazing contributions of Black culture to American society.”

“As the nation’s largest festival by per day attendance, the ESSENCE Festival of Culture is the crown jewel of celebrating Blackness, which fuels commerce, capital, and capacity that garners true economic impact for our global community,” said Wanga. “We are excited to return to New Orleans live and thrilled that there are options for virtual participation, that our full diasporic family, through our unapologetic “It’s The Black Joy for Me” manifesto, is happy to share with GMA3.”

Essence Communications is the number one—and only 100% Black-owned—media, technology and commerce company at scale dedicated to Black women and communities. With a community of more than 31 million Black women, ESSENCE inspires a global audience through diverse storytelling and immersive original content rooted in Culture, Equity and Celebration. The brand’s multi-platform presence in/ publishing, experiential and online encompasses its namesake magazine; digital, video and social platforms; television specials; books; and signature live events, including Black Women in Music, Black Women in Hollywood, ESSENCE Black Women in Sports, Fashion House, Street Style and the ESSENCE Festival of Culture.

Essence today announced the official dates for the 2018 Essence Festival® presented by Coca-Cola®, which will take place from July 5 – 8, 2018 in New Orleans, LA. Limited advance tickets for the 24th annual event’s nightly concert series will be available starting August 10 at 10:00am ET.

On the heels of a record-breaking 2017 Festival, the highly anticipated event is expected to feature a diverse, all-star roster of musicians and speakers for its nightly concert series and daytime empowerment programming respectively. The 2017 “party with a purpose” drew over 470,000 attendees and featured first-time performances by Diana Ross and Chance The Rapper, plus keynote conversations with Ava Duvernay, Mary J. Blige, the cast of the critically acclaimed film “Girls Trip” – Queen Latifah, Jada Pinkett Smith, Regina Hall and Tiffany Haddish – and many more.

Festivalgoers can start planning their ‘girl’s trip’ and weekend getaways by visiting Essence Festival for a recap of the 2017 Festival, information about advance ticket sales, the latest news about the Festival and to sign up for Festival-related newsletters.

#churchoutfit ⛪️ This morning was cloudy and w