Three Beauty Rituals You Should Continue Year Round 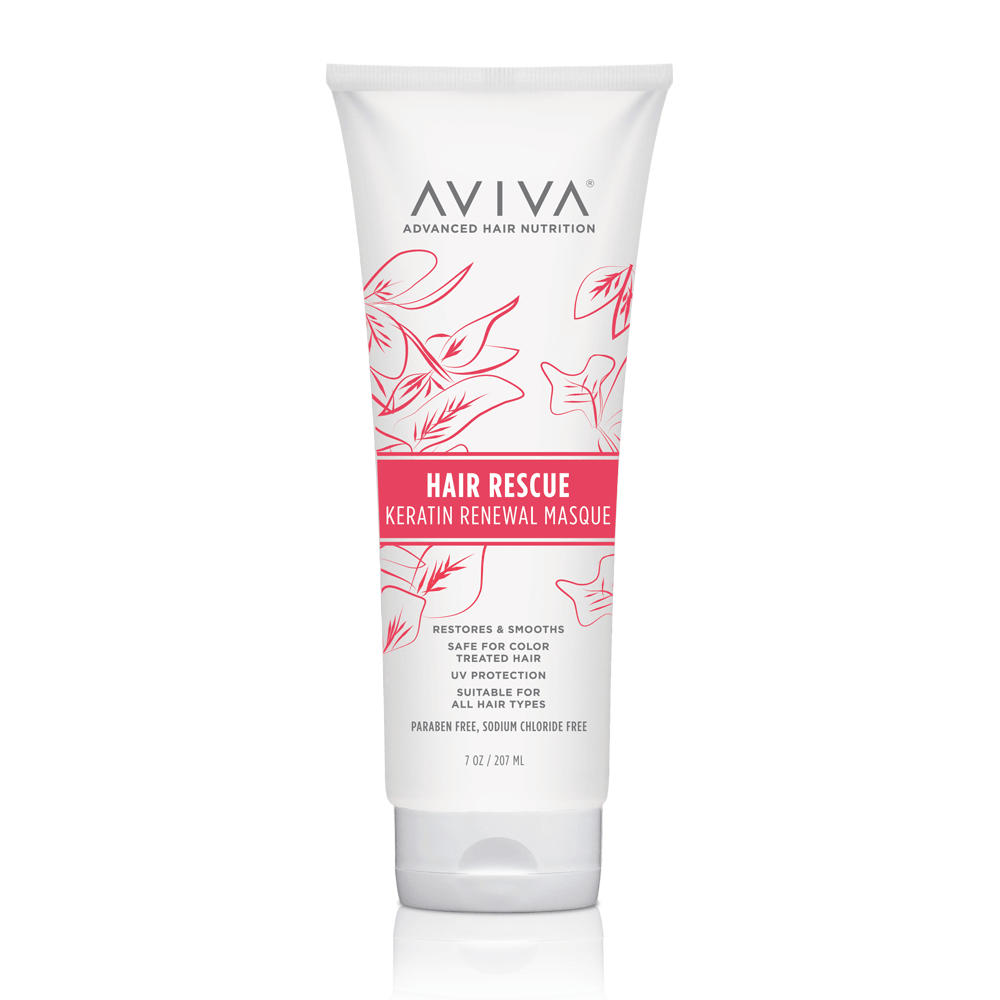 Let’s face it, now that the motivation of tiny bikinis and warm summer afternoons has passed, our normal beauty routine tends fall behind. However, regardless if you’re hitting the slopes or in hibernation mode this winter, it’s crucial you keep up with a few beauty rituals regularly. Below are three beauty rituals our industry pros say you should be continuing ALL year, no matter what the season may be:

Don’t Skimp on Sunscreen. Don’t be fooled by lower temperatures, overcast skies or rainy days. UV rays are just as strong when hitting the slopes as they are on the beach. “The easiest way to prevent sun damage and protect your skin is to apply an SPF of at least 30 every day – not to mention, look younger. Reapplying every 2 hours if in the sun is critical as well” says Dr. Nussbaum, Dermatologist and Brand Spokesperson for Sebamed.

Use Hair Masks Regularly. Do you color your hair, straighten it a few times a week or use a lot of hair spray? Adding chemicals, applying heat or using products are habits that we all find hard to kick, and can come with some unwanted side effects. Anna Urban, CEO of AVIVA™ notes that “you should be applying a hair mask like Aviva’s Hair Rescue Renewal Masque 1-2 times per week to repair damage and restore elastic, while replenishing the moisture which often depletes from dry summer heat and the cold winter air.” ($29.95, AvivaHair.com)

Wax Even Through Winter. Let’s face it, as the temperature drop we are inevitably becoming a little bit lazier with our normal waxing routine and the motivation for tiny bikinis and warm summer afternoons pass. Noemi Grupenmager, founder and CEO of Uni K Wax Centers notes that “maintaining regular waxes year-round will benefit you in the long run because waxing weakens the hair follicle, causing hair to grow back slower, lighter and thinner over time. Dry, winter hair is more likely to break when waxing, causing it to grow back faster and thicker, so you want to keep skin hydrated and healthy (ie. drink lots of water and exfoliate regularly.)”

With the holidays rapidly approaching, it’s no surprise that the biggest party season of the year is just around the corner! Whether you’re searching for the perfect NYE dress or need a festive frock for that office holiday party, David’s Bridal has got you covered offering a variety of midnight kiss-worthy frocks and stunning silhouettes!

Choosing an Engagement Ring: Jewelry that Suits Your Style 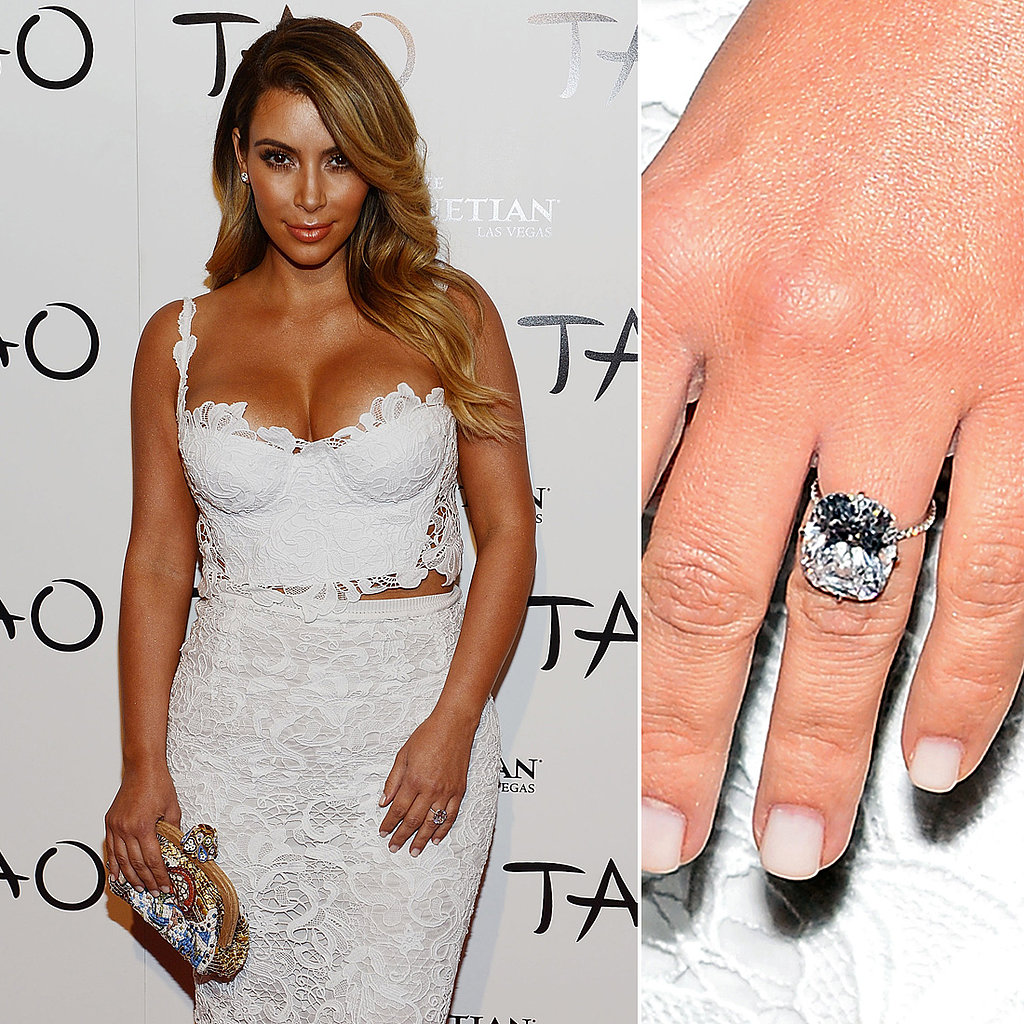 Jewelry is beautiful, but it sometimes doesn’t look as good on us if we don’t take our coloring into account. Some jewelry will pop against certain skin types, but others will look dull. Look at your skin color, hair color, and eye color to work out what suits you most. You can find this out by doing a simple search online. There’s loads of information out there to help you! Some jewelers may be able to give you similar advice too. Try Whiteflash for engagement rings in Houston where you’re likely to get professional advice.

That being said, if you find out gold suits you best but you don’t like gold, you don’t have to go with it. Go with the metal you’ll be happy wearing forever. It all boils down to what you like!

The kind of clothes you wear the most could dictate the engagement ring you choose. Let’s say you love shopping for vintage clothing. A vintage ring would look amazing when paired with all of those vintage finds! If you like dressing classy and sophisticated, then a classic style engagement ring would suit you. If you like fashion that is quite ‘out there’, you may prefer an abstract design with colourful stones. Don’t go for a classic style just because you think you should. Go with something that will suit you and the things you wear most.

What Type of Thing Would You Like to Wear Forever?

Remember, you’re going to be wearing this ring forever. If you’re going through a phase with the colour black at the moment, you may not want to choose an engagement ring with a black stone. It’ll be different, but you might like pink next year and blue the year after. Don’t choose something where you think the novelty might wear off in the next few years. Make sure it goes with the rest of the jewelry you enjoy wearing most of the time.

Why not take a friend engagement ring hunting with you? They can tell you what they think suits you best. It can really help to have the outside opinion of somebody else!

You could even take your husband to be with you to give you his opinion. As this commitment is about the special bond between the two of you, it makes sense for him to have a say in the ring he buys for you. Even if you simply make a shortlist and he chooses from it, it’s better than him having no involvement. 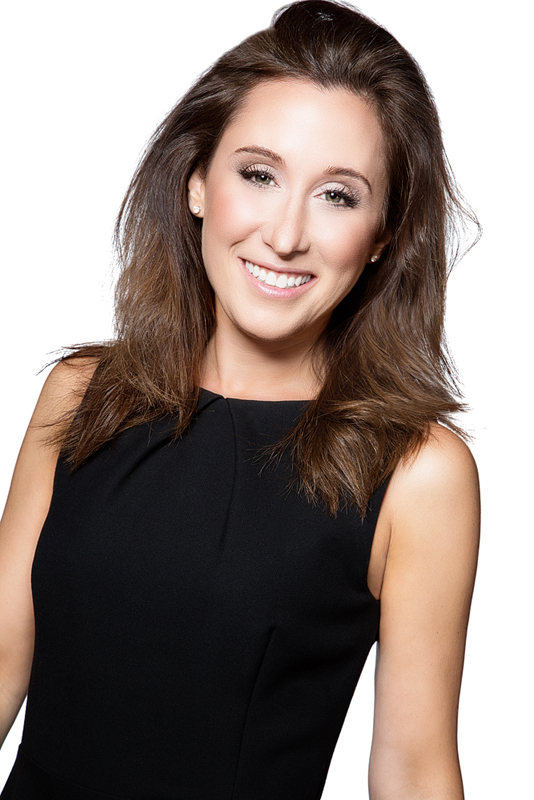 “Just as your skin can look dull and dry during the low humidity months, so can your scalp and hair,” says Rebecca Kazin, MD, FAAD. “Then add in our typical daily heating and styling tools which further stress and dehydrate the hair.”

As a top dermatologist at the Washington Institute of Dermatologic Laser Surgery and the Johns Hopkins Department of Dermatology, Dr. Kazin has seen her share of hair/scalp complaints. Here she shares her tried and tested favorites to help your readers survive winter with shiny, healthy hair.

Protect – If you must use heated styling tools, it’s essential to use a good heat protectant spray. I like Aquage Beyond Body Thermal Spray because it has ceramic-infused polymers and fortifying proteins to seal hair’s outer layer.

Nourish – To maintain healthy hair, you must add more moisture during the winter months. Apply Oribe Supershine Moisturizing Crème post-shower to calm frizz and satisfy and restore even the thirstiest hair to softness.

Shine – Our hair color fades faster in the winter as we wash our hair more often due to weather conditions. Restore radiance and shine with It’s a 10 Miracle Leave-in Product. It works on all hair types to bring out natural luster and manageability while also maintaining your color. 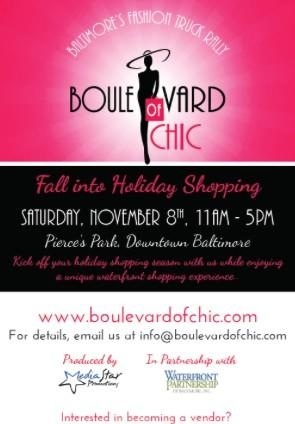 On Saturday, November 8, 2014 Boulevard of Chic will host Fall Into Holiday Shopping at Pierce Park. For more details, check out the information below and I hope to see you there! 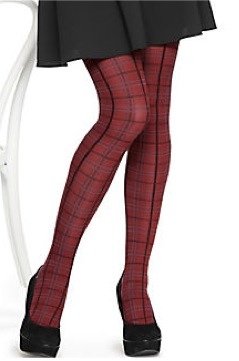 Excited to put all of the great new FW14 styles from Hanes Hosiery on your radar for some fun legwear! From funky plaid tights to color blocked leggings, all styles retail from $12-$28 at http://www.hanes.com

“Travel is a constant source of inspiration for me. kate spade new york: places to go, people to see is an illustrated compilation of the treasures that have formed the backbone of our collections over the years.”
— Deborah Lloyd, President and Chief Creative Officer, kate spade new york.

kate spade new york: places to go, people to see, the brand’s second book published by Abrams, will be available for purchase starting on October 14, 2014 through www.Amazon.com and major book sellers nationwide.

About kate spade new york
In 1993, Kate Spade designed the utilitarian bag she had been craving for years but couldn’t find anywhere and so began a revolution in the accessories market. Simple silhouettes with clever details and crisp palettes soon established a visual shorthand for the brand that’s recognizable the world over. In 2007, Kate Spade turned the reins over to the design powerhouse, Liz Claiborne Inc. which then became Fifth & Pacific Companies Inc, and now operates under Kate Spade & Company (NYSE: KATE). Deborah Lloyd, formerly of Banana Republic and Burberry took the helm as Chief Creative Officer with an aim to broadening the line while honoring Kate’s rich history. Today you’ll find the brand on the arms of women everywhere with nearly 300 kate spade new york stoes worldwide and a thriving e-commerce business. 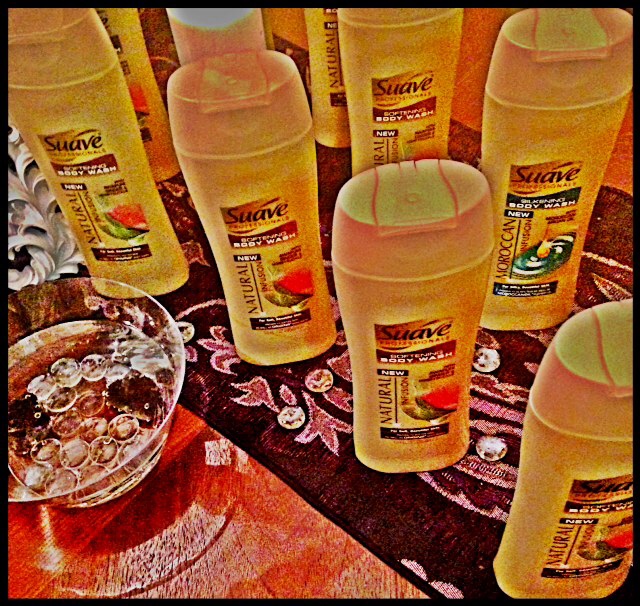 Suave Professionals Body Care launched their new product line of silkening body washes, lotions and dry oil body spray in Morrocan Argan Infusion and Natural Infusion Awapuhi Ginger. All of the products are non greasy and smell delicious which made me eager to try them out.

I was also challenged to host an at-home spa staycation for girlfriends; sharing the products with everyday women and encouraging the ladies to pamper themselves.  I mean, who wouldn’t want to enjoy a luxurious spa experience at home? The first step (for me) was to research the necessities of having a fun and successful spa party.  I decided to start with my first reliable resource…Pinterest.com

From there, I found tons of inspiration and started planning my at home spa event. I discovered this is a great party idea for anyone’s birthday, brunch, or girls – night in. All you need to host an at home spa staycation are candles, nail polish, lotions, towels, manicure kits, and cotton balls. And we can’t forget the delicious vegetable or fruit platters, cupcakes, and wine. Suave also shared some really cool DIY Body Scrubs for guests to create and take home.

Because I am a lifestyle blogger, I reached out to a few of my favorite brands to share products as gifts for my guests. The at-home spa staycation was a success and guests enjoyed making their very own DIY scrub and shared conversation (over wine) discussing individual at home spa secrets and beauty tips.

I strongly encourage anyone to host their own staycation with friends and try the new Suave Professionals Body Care!

More about the products: 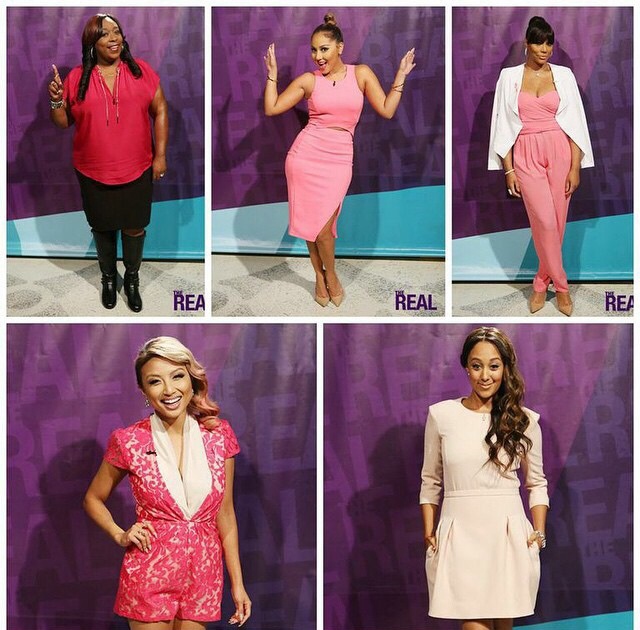 The Real Talk Show has become one of my favorite guilty pleasures.  All of the cast members have wonderful personalities, topics are on target with today’s new woman, and they “keep it real!”  Each day there’s a different surprise and we can’t forget about the fashion and beauty tips.

Most importantly, there’s always an opportunity to laugh and maybe even shed a tear with each episode. Today, the ladies looked “pretty in pink” as they celebrated Breast Cancer Awareness Month. Also, catch the clip below: 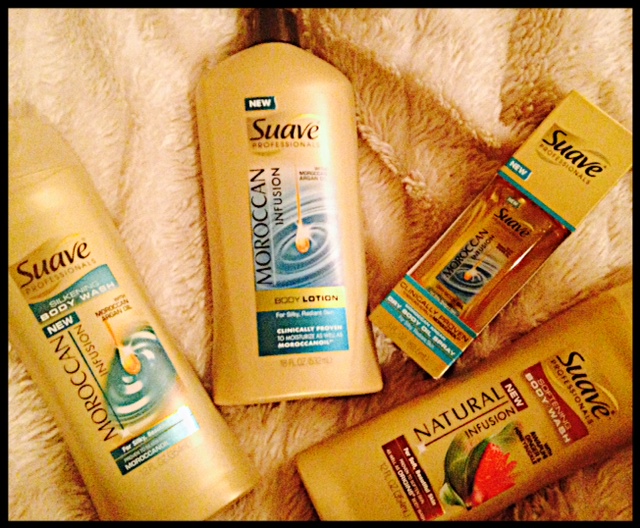 Join the at home spa experience and enter for a chance to win products from Suave Professionals Body Care.  This “at home” spa package is wonderful – the products smell yummy and left my skin glowing!

2.  Email to kim@stylelifefashion.com – “What Is Your At Home Spa Secret?”

Giveaway will end at midnight on Sunday, October 19, 2014 EST. The winner will be notified (via email)

☑️ Do you want to know the BEST boutiques in B

#ootd Be authentic. Be genuine. Be real. Be yourse

Thank you, @voyageatl for including me in your Com

This week, I will be wearing a black outfit for fi

Thank you @thejuicycrab.hoover for inviting me (St

The goal is PROGRESS not PERFECTION. ~ Kathy Frest