NAOMI CAMPBELL RETURNS WITH AN EXCLUSIVE EPISODE WITH CYNTHIA ERIVO

International supermodel, activist, and philanthropist Naomi Campbell welcomes Emmy, Grammy, and Tony Award-Winning Actor, Singer, and Songwriter Cynthia Erivo to “No Filter with Naomi” – a limited-time series under her highly popular “Being Naomi” YouTube channel. The intimate, live-streamed series has invited fans to #stayhome and save lives during this critical time and has focused on in-depth, career-spanning conversations between Naomi and a close group of her friends including designers, musicians, actors, beauty gurus, and media personalities.

WHERE: Streaming live on Naomi Campbell’s YouTube Channel. View all “No Filter with Naomi” episodes here.

Excited to announce that a Sephora inside JCPenney location is opening at the Colonial Promenade tomorrow, Friday May 4th!  It will be situated prominently in the center of the JCPenney store.

The store will offer:

Sephora hosted their grand opening inside of JCPenney at the Riverchase Galleria. There was live music, demos, and customers received a clutch bag with samples. A few of the featured beauty brands included Urban Decay, NARS Cosmetics, Beauty Blender, La Mer, GlamGlow, and Marc Jacobs.

Beyonce shocked fans and the fashion industry once again, being honored with the Fashion Icon Award.  This is no surprise for our website because the “Lemonade Queen” has so many diverse looks!  Additional highlights and winners include:

Handbags in The City – Luxury Fashion and Accessories

Handbags in the City is the ultimate fashion and luxury lifestyle destination in the Baltimore City area. The accessories boutique takes pride in extraordinary sales, unique styles, and excellent customer service.

Carrying some of the world’s most popular designers; the accessories boutique has everything from handbags, clothing, jewelry, luggage, and eyewear.

I have always been a fan of the luxury brand, visiting their Instagram account for new merchandise.  The boutique itself is a beautiful site and the perfect shopping destination if you’re ever visiting downtown Baltimore.  Let them know that Style + Life + Fashion sent you.

It’s great to have a trendy bag but you can’t beat the quality (and longevity) of a well-made purse.  Visit Handbags in The City, you won’t be disappointed!

Quick Fact: Handbags in The City also completes phone orders and will ship to anywhere in the U.S. Customers have to pay the shipping fee, but will exclude tax.

I wanted to share Kerry Washington’s red carpet look (tonight) for The Emmys 2015.  Kerry stunned everyone in this gorgeous Marc Jacobs gown; the beading was absolutely amazing and screamed high fashion! 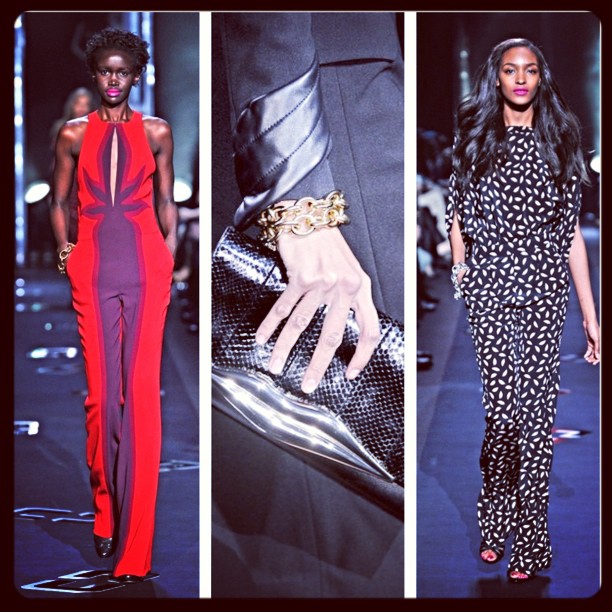 Below are photos that provide inspiration for Fall 2013, when we consider building our wardrobe.  Based upon my previous post, “Fall 2013 Beauty Trends and Accessories” I like to stay abreast of what’s current and new as it relates to fashion, beauty, and style.

My motivation behind this post series (or more so incorporating a trends element to this blog) steams from my family and friends asking what’s popular for the upcoming season.  The people in my life acknowledge that this is my passion and therefore come to me for wardrobe advice.

Therefore, this particular write – up centers around designer trends (for the fall) that have graced the runway last Spring.   I decided to compile a few looks and hopefully they will  help “spruce” up a few items you already own.  And don’t forget, it’s always great to find inspiration but learn to make every look your own!

What's for dinner tonight? You can have the delic